We are all breathing a sigh of relief knowing that we were successful in getting the mandated runway work done ahead of schedule.

But we still have a long way to go: there is an outstanding funding gap to pay for the slurry contractor. The good news, however, is that we secured a contract that was less than half of what we had been planning. Our plan was to raise funds for the worst case scenario–paying for full mobilization of equipment and crew from a “big city” slurry company to rural Gualala. According to the estimates we received last summer to inform our fundraising plans, that cost was close to $20,000. The original fundraising goal was $60,000.

The best case scenario was to “piggy back” on another local job to reduce the mobilization fee. And that’s exactly what we were able to do!

Mendocino County had their road crews doing prep work in Gualala in early June. A few phone calls to the county project manager led us to the contractor that had won the bid for the road work, Telfer Oil out of Windsor. Many calls were made and after a few weeks we were finally able to have someone from the company look at the airport and provide an estimate. We were all very pleased with the proposed cost!

The only issue was that by “piggy backing” on another local project, we had to commit to the contractor’s schedule. We really had to organize ourselves quickly to do all the necessary prep work of filling potholes, removing weeds, tagging the existing runway markings with duplex nails that could be located post-slurry with a metal detector, sweeping the asphalt, and much more.

And then the contractor informed us that the crew would actually be arriving three days sooner than expected! All of a sudden John Bower had to commit his entire work crew (plus Julie who normally has an office job!) to the airport prep work. It was a crazy week leading up to the slurry job on Thursday, July 17, 2014. But we got it all done. John worked from sun up to sun down, making for some very long, very tiring summer days.

The drastically reduced contract cost (even with the hired crew rather than volunteer help to do the prep work) was worth it, even though ORAA did not yet have all the funds. We paid the contractor this week, in full, with a small loan to cover the gap.

We are asking you to please consider donating to help ORAA realize its slurry funding goal. 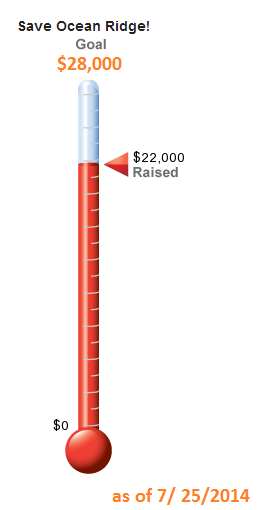 A lot of prep work was required before we could even consider having the slurry seal material applied to the runway. The potholes, shallow spots, and alligatoring had to be addressed so that the slurry mix would adhere to the asphalt surface for a long-term, durable result. In the days after the slurry sealing, big rig trucks were rolled over every inch of the surface to compact the slurry-sand mixture to encourage the bond to develop with the underlying surface.

We had always planned on asking for volunteer assistance for the prep work, but the shortened timeline meant that most people already had firm plans in place and were not available. Gualala may be a small place, but our coastal communities are jam packed with events and activities every week (so many reasons to fly in for a visit!). So the decision was made to hire John’s construction crew to do most of the work. John Bower’s office worked to carefully track all costs for the runway job.

We did have some amazing volunteers throughout the week and they all deserve a big THANK YOU because they worked really hard toward the airport goal. Wes Daniels, Ken Salva, Eric Kritz, Mike and Beth Roland, and Naomi Schwartz, we could not have done this without you!

ORAA will gladly accept any donations toward the prep/finish work costs. Remember that this work was a joint effort between the Bower family and the aviation community in order to keep Ocean Ridge Airport open to you, the public.

The Bowers and ORAA members truly appreciate your generosity and support with this effort. We look forward to improving all aspects of the airport for your flying pleasure in the years to come.